A huge tropical storm hit Sarasota this week, which gave me the perfect opportunity to experience the Print and Play game Witch Hunt in our cozy dorm while the rain raged outside. In this post, I’ll delve a bit deeper into this seemingly simple game to really get a look at how it works and what makes it interesting using some of the terminology found in The Art of Game Design: A Book of Lenses. 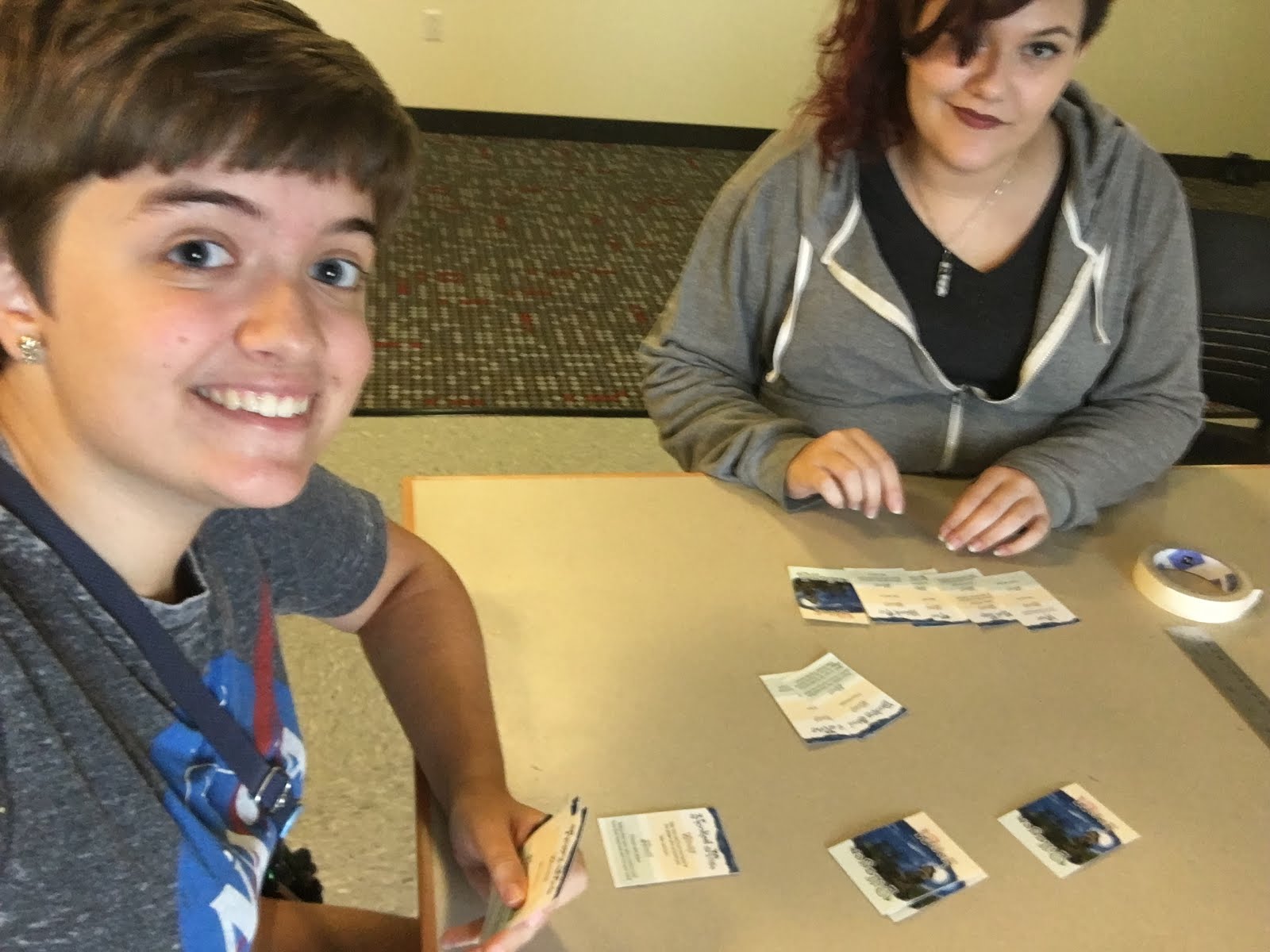 In short, the goal of Witch Hunt is to win by being the first to accumulate 5 points, which are earned by either discovering Witches (if you are a Villager) or by staying hidden (if you are a Witch.) The core mechanic of this game is something it calls accusations, which are essentially challenges issued to another player which they can then counter or concede to. The rest of the gameplay revolves around these accusations.

Witch Hunt does not feature an explicit game space, such as a board or other location-based game mechanic, but one could say that the game’s space is simply one of zero dimensions, where its space is actually the conversations between players in which vital information is exchanged. The so-called social space among the players of the game is where all the game’s moves, strategies, and events take place.

The physical objects of the game are the two different types of cards, none of which marks your identity in the current round and the rest of which allow you to take different actions by deploying them into the game. The Identity cards have what could be called a Role attribute, where the state is either Villager or Witch depending on what role you have chosen (and therefore, what role the card represents) for that round, as well as an attribute that determines whether your Identity has been discovered or not. The Rumour cards have an action attribute which varies from card to card and also is influenced by your current role. In addition to this, they have a “revealed” attribute which keeps track of whether they are in a hidden/inactive state or whether they have been revealed/entered into play. 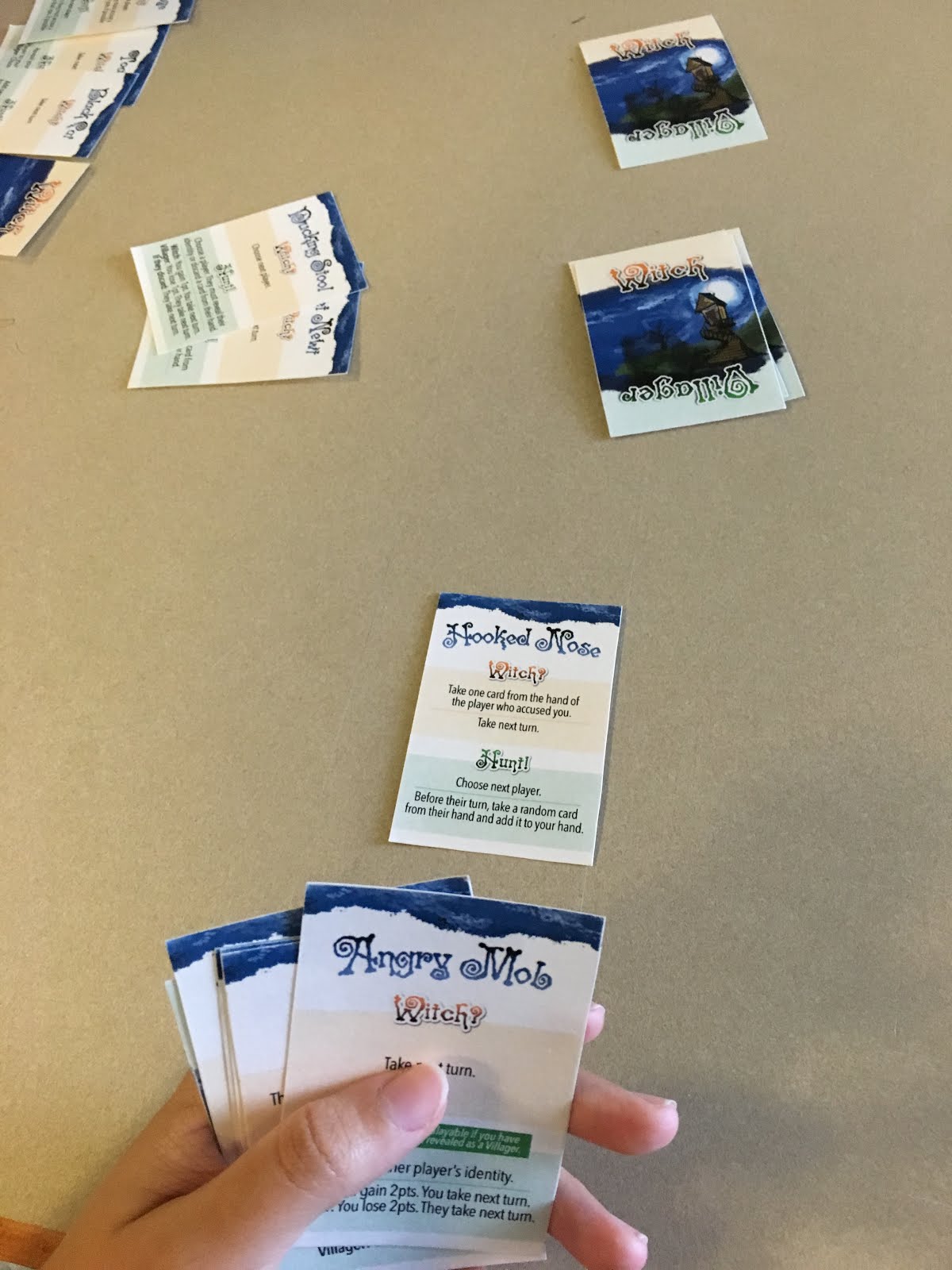 During a player’s turn, there are two operative actions they can take. They can either accuse another player of being a Witch, or play a Rumour card and follow its instructions. If a player is accused, their available actions are to either reveal their identity, or counter the accusation with a Rumour card and follow its instructions. The resultant actions that are derived from this fairly simple method of gameplay, however, are much more vast, as a player may choose to be on the offensive and spend their time accusing others before they themselves are discovered, they could take a more defensive method, they could play their cards in order to give a certain impression to other players in order to trick them and cause them to lose points, and many more overarching strategic decisions.

Interestingly enough, the game doesn’t run until every last player is discovered and then end as one might assume, but instead uses the aforementioned event to mark the end of an individual round, after which the cards are shuffled and the game begins anew, with new hands and new identities. This seems to work in the game’s favor, as rounds are fairly short and introducing this mechanism allows for a longer play session. Although it does mean that any strategies players have can’t be too far-sighted, it also allows players who were dealt a disadvantageous hand to get a chance to come back into the running.

Some crucial skills employed by this game are the ability to read other people and predict their emotional state and intentions, as well as preventing others from reading your own. A player who is skilled in this manner will have an easier time deducing just who to accuse and when, allowing them to earn enough points to reach victory. Some strategizing is also involved, as players have to think ahead in order to decide which card to play (do I use this card now or save it in case I’m accused?)

Overall, this game strikes a good balance between skill and chance, with the only luck involved coming from being dealt supposedly random cards at the beginning of each round and having to work with what you get in order to succeed. I enjoyed this balance personally because it prevents the frustrating situation of one player clearly having more skill but another player winning just through sheer luck, making the game feel almost pointless to play with any effort, but still introduces an element of variety that makes each play session different.